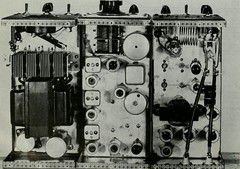 9. Grounding the Metals for Static Electricity; especially in wet weather and in fully carpeted listening environments, static electric become an issue. The carpet is charged with static electric which can be passed through the electronic equipments via the rack and/or via human touch. Static electricity on the carpet is such powerful that when checked in the morning before somebody walks on it, can be clearly seen by simple tools sold in Radio Shack

What benefits you may expect from this tweak is I don’t know why but less blurry and more tide lower bass.

10. Loudspeaker Distance from the Front Wall; Loudspeaker producers generally recommend the distance of the speaker by the front wall (the wall behind the speakers). Generally speaking, the speaker should be located as far as possible from the front wall. (Side walls as well) If they are so close to the wall, bass standing waves will be reinforced (explained in article five) and mid/treble band will be compressed due to excessive bass energy.

Some audiophiles find the desired bass volume by placing them closer to front wall which is not correct. One thing should be considered that such bass increase is not due to the original sound but it is the consequence by the room response called coloration.

Before end, the reason of a preamplifier was stipulated in four basics;

a- To connect more then one unit together
b- Recording to tape from some sources
c- Low volume output and inverted polarity signal of turntables (as the only source component)
d- Bass, treble adjustment requirements

Nowadays, CD, SACD units can provide 5-8 Volts of outputs which are more than enough for the power amplifiers. Audiophiles are not interested in tone adjustments but focused on simplicity anymore. Dedicated phono stages are in common usage, hence, the majority of the requirements are not valid anymore.

The main and the only basic job of a modern pre-amplifier is to lower the volume level, not step it up !!
Just try to imagine a pure signal from a CD, or DAC through the power amplifier, then cut this link, add four plugs, four female plugs, a pair of interconnects, lots of resistors, capacitors, tubes, transistors and all that stuff in the link. How can you keep the signal purity and can you make something better then its original !

An active line stage demolishes the neutrality and the purity of the original sound. Such a corruption may not be so evident in most of the lower resolution systems or disregarded by some people on purposely. Every active line stage has its own tonality and coloration. As a matter of fact, audiophiles generally use line stages to balance their tonality problems in systems. For instance, a tube line stage is used to calm down a firm sounding solid state power amplifier or a treble rich line stage is used to compensate the treble poor power amplifier and vice versa. If this is the case in a system, fully natural line stage and lack of coloration will not be regarded by the audiophile.

Following me, the consideration should be to change the power amplifier till finding the desired sound rather then playing with pre-amplifier. In other words, to deal with the original problem rather then trying to mask the problem.

It is almost in consensus that using a very simple volume pot adds so much neutrality and purity to sound. But in such cases, some other problems appear. A volume pot which is either a potentiometer or a stepped alternator works with the resistance principals. Every volume step adds different resistive path to signal, thus lowers the volume. Due to the complexity of the music signal ( 20 Hz-20 kHz), such a resistive load will act like a barrier for different frequencies. For instance when turning down the volume level, the treble is lowered and the bass is condensed or when you increase the volume, mids are excessive or vice versa. Not to forget to mention is the lack of dynamic range as well. A line stage eliminates these problems.
Due to these facts, volume control pots or analogue volume controlled CDs can not be used stand alone as line stages

Such units do not work with resistance principals and do not add resistance to the signal path. The only resistance of such amps is approximately 200 Ohms due to the cable in windings.

Transformer passive line stages consist of two transformers, one for the left channel, and one for the right. They have one primary winding and multiple (12-24 steps) of secondary windings. Their principal is to lover the volume by changing the volts, rather then adding resistance. Up to my knowledge, there are only three producers of such line stages. I used two of them. Both of them are providing extra ordinary natural, calm and undistorted sounds.

I heavily modified the Antique Sound Lab myself which is very good product and quite cheap too, (don’t underestimate its price) but Audio Consulting’s Silver Rock made of pure silver is something else.

12. Good Tubes (NOS Tubes); is it logical to pay 100? to and old tube while the new one costs 10 ? I believe it is. A good tube can change the characteristics of a tube electronic as if you replaced the entire unit. Nos tubes are not easy to find, quite expensive but worthwhile to use. Especially the upper frequency hiss is quite lower with Nos tubes.

13. Very Easy Polarity Finding Method; Generally speaking, European (German) standard AC plugs do not have the signal direction. US, UK, Swiss AC plugs have one way to connect to AC, so + and – phases can not. So in such cases, it is not easy to find out the correct polarity.

Electronic components can work properly regardless of the polarity. Our televisions, refrigerators, bulbs, computers everything. Why the AC polarity is quite important in Hi-Fi !

Electricity arrives from (+) passes the electronic circuit and departs from (-) Generally the mains current arrives in the power supply of the unit first then reduced to desired voltage by of the electronic circuits. At this case, mains is automatically filtered by the power supply section. The transformer of the power supply section behaves like isolation transformer, input and output currents are physically separated. If the polarity is not correct, the mains will arrive to system directly from the back door and will carry all the pollution like RFI/EMI into the unit. Due to the fact, it is important to find out the correct polarity.

Most of the electronic’ polarity is similar. If the unit has detachable power cord and IEC kind of input, the right hole should be the (+) mains when do you look at the plug front the front face (as seen below)

Another simple method is to check the mains fuses. If the unit is equipped with an exterior protection fuse, release the fuse and check it by an electricity check pen while the unit was connected to mains. It should be (+) signal. If not, reverse the AC plug from the wall

14. Listening Volume Level; It is for sure nobody’s business to tell you that what the correct listening volume setting is. Some audiophiles like very low listening level, some turn on the volume till the windows are broken.

If the outcome is to achieve the ambiance of the recorded venue, volume level should be adjusted accordingly but not more or not less. This case is applicable to acoustic instruments only but not to electronic music, jazz or disco etc.

What ever the listened record is, correct volume setting should be the one which does not enlarge or shrink the original instrument. Higher volumes may For instance a guitar should be played with the original volume of a guitar by correct volume setting. If volume level is increased, the body of the guitar will became bigger in obsolete terms, on the other hands, full body of a Mormon chorus will not be so realistic at low volumes

15. Warming Up the Speakers and Cables Before Critical Listening; Apart from the theory that “Solid state electronics provide their best sound for a few minutes till the transistors became warm.” every single audio equipment needs a warm up time. This time is at least 1/2 hour or even 1 hour in spite the manufacturers recommend less. Up to my knowledge, the reason behind this is the specifications of the resistors, capacitors, tubes and other stuff vary if they are cold or warm. Manufacturers make final settings when the units are warm, otherwise they would play perfect for the first half an hour and worse after warmed up.

As a result, the warming up time should be completed by playing (may not be listening) the entire system.

16. Proper Loudspeaker Selection for Listening Room; Loudspeaker should be selected in conjunction with the listening room dimensions. Unfortunately the general tendency in audiophiles particularly in US is “the bigger is better”

It is like some new starting skiers that choose the best ski equipments prior to learning and facing with so many problems afterwards.

Big loudspeakers are difficult to position, difficult to drive, affected more from the room boundaries. If the speaker is bigger for the room, excessive bass energy will diminish rest of the sounds. The bigger speaker means bigger problems. Driving big speakers requires challenge, experience, sources, time and money.