EMI Shielding and Testing as Related to Mobile Technology 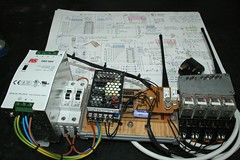 EMI Shielding and Testing as Related to Mobile Technology

Part of how Cell phones work relies on reducing electromagnetic interference that can impact clarity of calls between users. This is don through various forms of EMI shielding on the parts that make the phone work, the outer casing of the phone, and on the antennas used to transmit the signal across the network. How electromagnetic shielding does this is through reduction of the electromagnetic field around the components and the item itself in order to enhance the clarity if the signal being received and transmitted. This shielding is related to RF shielding also, which blocks radio frequencies in the electromagnetic spectrum. Typically EMI shielding is formed of conductive and/or magnetic substances and applied to enclosures, cables, and other areas that require protection from interference.

RF shielding is designed to reduce the coupling of radio waves specifically, while EMI shielding can be applied to this subset as well as those shields that cut electromagnetic and electrostatic fields (one form that does this is the Faraday cage) as well. Common static inducing or low frequency magnetic fields are not blocked by these types of shields however. A number of factors are related to exactly how effectively the shields work, including material type, material thickness, shielded volume, frequency of the fields, size of the fields, and shape plus orientation of apertures in a shield to an incident.

For cellular antenna EMI shielding can be created from a number of things, like sheet metal, metal screen, and metal foam. The mesh size in a screen shield must be smaller then the wavelength being shielded against. Interior sides of plastic cases requiring EMI shielding may be coated with metallic ink or similar substances to create the proper shield against interference. Commonly used metals for this include copper and nickel. Shielded cables, as one might find as power devices, usually have a wire mesh around the inner core that keeps the signal from escaping the conductor material and prevents outside radiation from impacting the quality of the signal. RF shielding is used on a wide number of applications including shielding RFID chips included on passports, computer and keyboards used by the military, medical and laboratory equipment, and AM, FM, and TV broadcast facilities.

Shielding can work in several ways, by either canceling the field inside it with an opposing charge, or by creating a varied field that generates eddy currents that reflects the radiation away. RF shields are limited because the electrical resistance factor of the conductor prevents a complete cancellation of the incidental field, the ferromagnetic response to low-frequencies prevents full attenuation, and gaps or holes that exist in the material cause the current to flow around them, thereby creating holes in the shield itself to the frequencies that are needing to be reflected.

The types of EMI that mobile technology needs to be shielded from is vast and varied. Not only do internal components need to be blocked from each other, the system needs to be protected from signals that might interfere with the clarity of the calls being processed. Disturbance from the external radiation can cause serious degrading in the quality and performance that a cellular system offers the consumer. Sources of this can come from anything that carries rapidly changing electrical currents including the sun it self.

When looking at the types of EMI or RFI being shielded or tested for one should be aware of the two forms that it is characterized as. Narrowband EMI is typically from intentional transmission sources like radio and TV stations, pagers, cell phones, and similar devices. Broadband interference is related to incidental emitters like electric power lines, motors, thermostats, bug zappers and other devics that have rapid on/off patterns. RFI that is broadband can be very hard to filter out once it has penetrated into a receiver chain.

Where internal components are concerned one will find that integrated circuits use bypass of decoupling capacitors to reduce the EMI they might transmit There may also be rise time control of high-speed signals through series resistors and Vcc filtering. These are used first with actual shielding be applied only as a last resort because of the additional expense that shielding has. Even so we can easily find examples of digital equipment designed with metal or conductive coated plastic cases which act as EMI shields. In order to check the effective nature of such shielding designers need to test new prototypes for RF immunity inside anechoic chambers with a controlled RF environment in order to gain proper readings of the capability of integrated circuits to reject RF.

The use of EMI shielding is a must for testing and getting the full benefit from mobile technology. There are many other terms used in this procedure which include EMC/EMI testing, bandwidth testing as well as knowledge of electromagnetic interference. Having a sound knowledge of all these terms will enable you to use your cellular service in a much better way.