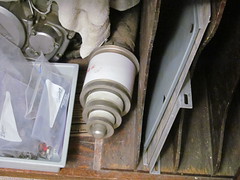 Launch towers are expensive and have a much tighter tolerance in the design. Many who use them will design the tower to work with a particular rocket, making the project even more expensive. The main reason they are used is the weight of the rocket is just too massive for a launch rod and the lack of launch lugs is primarily critical if your rocket is planning on going Mach.

There have been a lot of people that launched several high-power rockets and all use launch lugs, although the bigger the rocket, the larger the rod. They use two lugs, each 1.5 inches long, cut at 45 degrees on the upwind side. Most of them use a launch rod as a guide to make sure they are glued on straight, with one at the base and one towards the top of the body. With a good amount of distance between them, they provide a good smooth liftoff, and the drag of such small, angled tubes is negligible.

Most like to keep there launch lugs small but strong. Some use copper tubing (nice and thin walled), cut in on the top at about a 45 degree angle to reduce drag. Cut them only 2″ long where they are epoxies to the body tube. They use two of these lugs, and place them about 12″-18″ apart, with the lower one at the base of the rocket. Put the launch rod through the lugs and tape it to the body while gluing the lugs so they are aligned perfectly. They work great and I’ve never heard of anyone having a problem with them.

Launch controller electronic schematic looks very good, although I will admit I know little about resistors and diodes, which is why I don’t use them myself. That’s why most use two separate buzzers instead of a diode to prevent the backflow of electricity to send full voltage through the igniter when the test button and launch button were pushed together with all other safety features disarmed. Some just experimented with various wiring combinations until they found one that didn’t fire the igniters when they pushed various combinations of buttons.

Launching rockets three at a time is pretty easy. You just need to run three different sets of leads out to each rocket from one controller. You will need a battery that will be able to handle the load. As far as the launch in sequence goes. Back in the “good old days” they use to use a “nail board”. This is exactly what it sounds like. A battery was attached to a bunch of nails that where wired to the rockets. When you touched the launch lead to a specific nail it would send the rocket skyward. You could then move to the next nail/rocket.

This would fire them in any sequence you wanted. A very crude, but effective way to launch. You could take this idea and use the basic concept and move it into the 20th century and use a rotary switch to launch a specific rocket. This way you could keep all the “safety” features of today’s controller’s in place and just route the launch voltage to the rockets.